Spotlight on the Composer: Richard Burchard 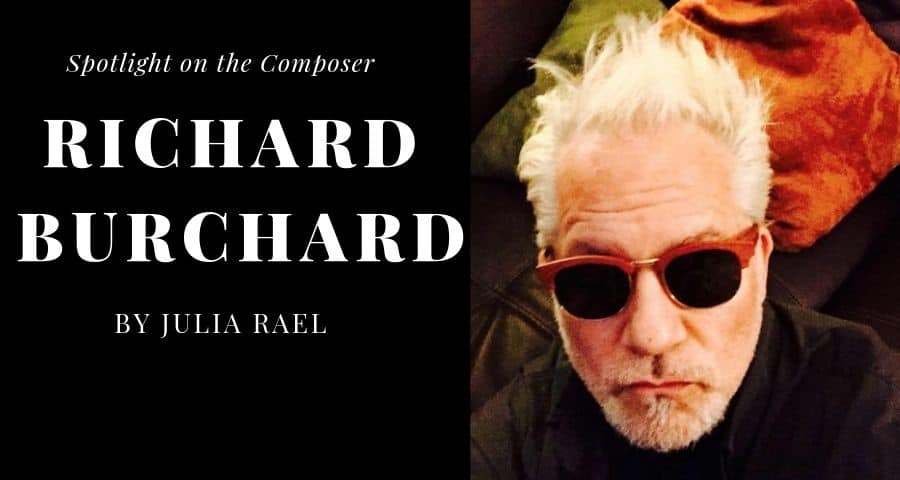 Richard Burchard is highly esteemed worldwide for his stirring and inspirational choral works. He has completed over 100 commissions, and each one has been created with remarkable craftsmanship. His music has been premiered worldwide, including Australia, Indonesia, France, Germany, Austria, China, Portugal, Italy, and Spain.  Burchard recently retired from his position as an Associate Professor at Bellarmine University in Kentucky, where he also served as the Executive Composer on Campus, and he plans to dedicate more time to writing in his retirement.

Burchard’s style is immediately distinguishable. His works are uniquely his own. Writing in a Neo-Renaissance style, Burchard focuses on composing works that inspire and uplift – as opposed to the difficult dissonances and conflicting emotions that are found in many “modern” pieces of choral music today. Instead, he uses ancient and classic texts and pairs them with modern chord progressions and harmonies that remain unceasingly brilliant. His works are laced with pure harmonies that not only bring peace to the listener but also unify choir members.

One of Richard Burchard’s first pieces published by Gentry Publications was Miserere Mei. The brilliance of this piece lies not only in the masterful chord structures and harmonies, but it is seen also in the way that Burchard brings the ancient text to life. As the lyrics implore, “Have mercy on me, O God, in accordance with thy generous mercy…” the musical ideas that are laced within the piece captivate the listener and draw their hearts to prayer. This dazzling piece, written for a cappella mixed voices, is included in The Bruce Rogers Choral Series, published by Gentry Publications.

Following the strong response from his first few works, Burchard was given his own series with Gentry Publications, The Richard Burchard Choral Series.  The series focuses entirely on Burchard’s own compositions and arrangements. His work has also been published by National Music Publishers, Hinshaw Music, and the H.T. FitzSimons Company – all divisions of the Fred Bock Publishing Group. In 2018 his first major work, The Seven Last Words of Christ, was published in The Richard Burchard Choral Series by Gentry Publications. Scored for SATB voices and String Orchestra, it is a hauntingly poetic depiction of the suffering Christ experienced on the cross. The consonant and polyphonic movement of voices in minor keys resonates with listeners and transports them to that point of suffering absorbed by Christ. Each of the seven movements and a prologue fantastically express that emotion which Burchard so effortlessly delivers in all of his pieces. The Seven Last Words of Christ contains an optional string quartet and organ accompaniment, and it is a perfect fit for both sacred occasions and concert performances. Sitting at a medium difficulty level, this piece would be beautifully performed by church choirs, college choirs, and advanced high school groups.

“Starting with a single unison line before opening up into lush chords and harmonies, this setting of O Magnum Mysterium evokes the Medieval chant tradition while still being thoroughly original and modern. It is beloved by singers and audiences alike.”  This piece, arranged for a cappella mixed voices, is truly touching. The text speaks of the sweet mystery of Christ’s birth in a manger. This setting of O Magnum Mysterium stands out as entirely unique and anyone who hears it will certainly want it in their own personal music library.

In Paradisum is another excellent Richard Burchard piece within the Fred Bock catalog, published by H.T. FitzSimons. An uplifting anthem for SATB a capella voicing, this selection is an excellent choice for liturgical services during Holy Week or All Saint’s day. This piece is part of the St. Patrick’s Cathedral choral series, edited by Jennifer Pascual. In Paradisum would also work well as an excellent concert piece. It is another outstanding example of the Richard Burchard style: beautiful homophonies flowing through polyphonic lines and creating a masterpiece of musical poetry. The traditional Latin lyrics speak of being ushered into Paradise by the angels and saints that have gone before, and the ethereal sound presented in the music beautifully portrays that idea. This piece contains two solo lines that fit nicely into the soprano range, which also lend to the angelic quality of the music.

One of the many stand-out pieces by Richard Burchard in the Fred Bock catalog is My Prayer, for SATB Accompanied with optional cello. This piece is also included in The John Flannery Choral Series, published by H.T. FitzSimons. The piano accompaniment plays enchanting arpeggios throughout the song, providing musical support to the prayer being sent up to heaven. The personal text, written by Stephen Bock, expresses a longing to be used in God’s service in ways that would glorify Him. While most appropriate in church settings, My Prayer would also make for a very powerful concert piece.

Every now and then, you hear a piece of music that inspires you. Sometimes that comes through exciting rhythms, pronounced dynamic changes, or inspiring melodies and harmonies. Every person has different tastes and opinions on what choir music should sound like, but Richard Burchard has tapped into a style of composing that can appeal to all audiences. He has taken from ancient music the aspects that make it timeless and blended them with modern chord structures that appeal to the very soul of musicality. His creations are filled with all the necessary ingredients to create immortal pieces of music. Undoubtedly generations to come will be ever thankful for composers like Burchard who were faithful to create something authentically beautiful in a world where chaos is applauded and treated as art.