On the Podium: Allan Petker – Senior Editor for Gentry Publications 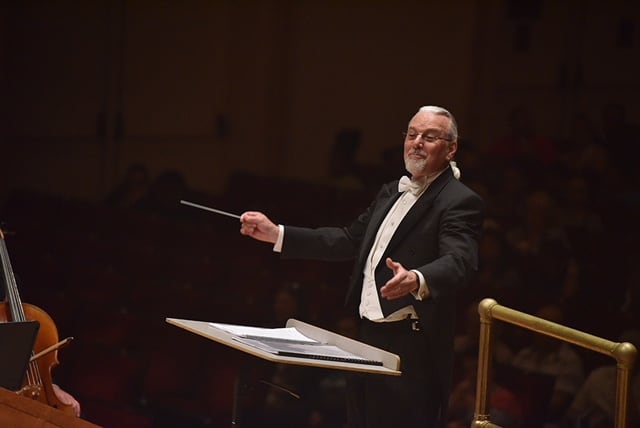 Allan Petker has been a valuable member of the Fred Bock Publishing Group since 1975. His down-to-earth mindset pairs well with his curiosity and creativity to help us curate distinguished music selections for Gentry Publications that are perfect for many different types of concerts and performances. I greatly enjoyed my chance to speak with him about his role as editor for the Gentry Publications imprint. He has brought so much to the Fred Bock Music Company through his personality, his music selections, and even his own compositions!

I very much enjoy curating the Gentry imprint. It is a more advanced imprint for both the sacred and secular markets. Gentry is the high end of sacred and secular choral music. This is a nice fit for me as all of the music is very similar to the types of things I choose for the groups I conduct.

Seniority is the simple answer. I used to help curate all the imprints with Fred Bock, then after his passing, I was on the Review Board for all the imprints. Steve Bock has been appointing excellent specialists to head the different imprints as we have grown. My musical skills and history with the company made me a good choice to run Gentry.

I started with Fred when I was getting my Master’s Degree. I met Fred when I was working at Bel Air Presbyterian Church, directing their youth choir. I was newly married, and Fred gave me a part-time job. When he first brought me in, he told me, “Oh, you can help me send out catalogs.” Over time, Fred gave me the editings of Walter Ehret to go over – Walter had so many works published, and he published under many pseudonyms as well. Being able to see how he edited taught me so much about preparing a piece of music. I got books on the subject as well, which resulted in a wonderful education for me.

It was the first catalog Fred started. It contains some outstanding yet diverse writers, from Robert Young and Jack Halloran to Stacey Gibbs and Richard Burchard – these are some things that really set us apart. They bring a quality of music that is really phenomenal. As we moved forward, there were new writers that came in, and we started having a series with some composers. Composers such as Rosephanye Powell are so grateful to Fred for giving them a real established start with Gentry. Composers like this really give Gentry its personality – and we keep building it.

He Came All So Still is a stunning new piece by a promising new composer, Nathaniel Adams. When I first heard the piece, I recognized immediately the excellent craftsmanship and beautiful writing. It’s an ancient text I’m familiar with – through Benjamin Britten. Nathaniel Adams uses the vocabulary that is part of serious 21st-century classical musicians – bringing that freshness and youthfulness – but still showing respect for the fact that it’s an ancient text. It’s extremely well-crafted, and that’s what caught my attention.

I loved both undergraduate and graduate studies. The graduate was the best. At the graduate level, you’ve passed all the rudimentary and non-music courses. I love getting into the detail of music analysis and learning about the development of music as a science. It’s really helpful as a conductor – analyzing a composer’s music teaches you so much about the time they lived and how they constructed their creations. Looking at music from the Renaissance, Baroque and Classical periods…it’s like reading a storybook through music. All this analysis gave way to really great debates and discussions about why things happened and what caused things to change, etc.

The professors were there to teach us how to really sit down and study the scores, which was so beneficial to me even now. I would rather study a score on an airplane than read a book because I enjoy it so much.

It was never a discussion. I loved and still love the viola (I like the violin, guitar, and mandolin too, but not like the viola). I was always headed towards conducting probably because my father was a high school choral conductor.

I’m so glad I made the decision to get my undergraduate in viola. Because I knew I wanted to move into conducting, I knew the training that I would get as an instrumentalist would prepare me better to be a conductor. I’m now very comfortable with an orchestra – because I’ve played with them so many times – and many choral conductors are not.

John Alexander in conducting. Fred Bock in publishing and composition. I learned a great deal from John as a conductor. He taught me about hand independence – one hand keeping your beat. It’s something that I still practice today.

I met Fred through the Bel Air Presbyterian church. He approached me about starting a youth choir – I had previously had a very successful one in Bakersfield. I was also writing music at the time, so I spoke to him about those pieces. One of his first comments to me was “Yeah, you need to write about 50 more pieces.” (I was offended, but only for a little bit.)

As time went on, I began seeking out any conductor I could work with. I became involved early on in the Choral Conductor’s Guild – at the time, it was a major force in the music field. I became president of that organization, and that enabled me to be able to meet more people that I could work with.

It did what it is supposed to do: teach me the basics and inspire me with great teachers and experiences.

Outside of two years in Germany and one in France as a child, I primarily grew up in Bakersfield. For a small town, it had, and continues to have, a strong classical music community, great support in their school system and a philharmonic orchestra which I enjoyed playing in as a high school student.

My father was a church and high school choral director. My mom was his accompanist at school and at church. I guess I always sang in choirs!

Hmmm. Differ? Popular? The choral arts differ because it is all about multiple vocal parts making music together. It is centuries old – the oldest in development within written composition. “Popular” is a designation within the music that changes meaning based on time and genre.

The choral art form is very distinctive. It’s a different instrument – just as composing for a string orchestra has unique timbres and techniques. When it comes to working with a choir, it’s different than working with a quartet or small ensemble. The fact that you have more voices means that you’re going to write for them and work with them differently. One of the things that’s unique about a choir is that it’s a different tone quality, and of course, there are words. So your interpretation and approach to everything are affected by that – and I find that complication to be a beauty. There are just so many options! I love the fact that it’s historic – I can dig back in time and see that there have been composers writing for that medium for a long time. And I love the fact that choral music can be combined with so many things – choir and orchestra or instruments. It’s a wonderful medium to play in.

When it comes to “popular music”, I notice that many things changed dramatically when we began to record music. So many things have changed, even within the economy. People were able to relate more quickly to a piece that has 3 chords and a storyline, sung by one person. The music that existed prior to recordings is difficult to preserve and essentially move forward.

I’m not the least bit afraid that the tradition of choral music will ever go away. There are too many people who are moved by it – whether they be writers, performers, or listeners. It may never be as popular as “pop” music, but that doesn’t bother me. I’m not worried about its fate. You notice in churches, however, that there are becoming fewer and fewer church choirs. But I don’t even think that it’s going to go away there. Even with the praise songs and such, they can often be arranged to work for a choir.

Church music has been following classical music for quite some time. There will be new composers that are going to keep changing the vocabulary of our sounds and ears. That’s not necessarily unique to choral, but there are composers that have really made an impact on our modern sounds – Randall Thompson, Howard Hanson… and moving forward, Morten Lauridsen began to change things and dissonances became more prevalent. And following him, Eric Whitacre broke through with sounds that we have never heard, but they are so interesting that we flock to them to hear more.

What’s going to be fascinating is that I have no doubt that someone else will come along and show us a sound that is new and exciting. I can still remember a time when writers were writing suspended chords, traditionally like a 4 -2, and all the sudden people started incorporating the 3! (for example, 1 – 3 – 4 – 5) That dissonance at the time was crazy! But as we moved forward, that sound became more commonplace, and it’s now a sound that people desire. If you look at the consonances to dissonances dating back to the Renaissance period, the dissonances have greatly increased and more and more of them are influencing the music.

To me, dissonances represent the complexity of a story. Every good story has got to have tension! That’s what makes it interesting. Music follows the same story patterns. But everyone tells that story in a unique way.

I think you’re now venturing into a genre I don’t like… Now I’m not a church choir director anymore, but I used to be. It seemed to me that the simpler the music, the simpler the theology. A church with really black-and-white preaching has music that followed that same pattern. The songs would end with exciting chords and make you feel good. But I always felt that styles like this were gutless and largely mindless. I never found that it fed my soul in any way. In the church, I personally want a theology that is living and active, and I would hope that the music would be the same. There can be great sacred music when you have fantastic text and music that reflects the thoughtfulness of that text.

Choral music has sometimes been called “the first art.” Singing seems to emerge in every culture along with speaking. Its purpose is to communicate, which it does at a level separate from any other. The choral arts have thrived and continue to thrive because it elevates the experience for singer and audience alike. It remains relevant in both sacred and secular venues. Unique to all other art forms, it most often uses words which the music carries to a deeper level of expression. The experience of serving as a singer in a choir is truly glorious and unlike any other.  It is a privilege to serve as a conductor in this field – plus you often get to add orchestral instruments, which makes it even more fun.