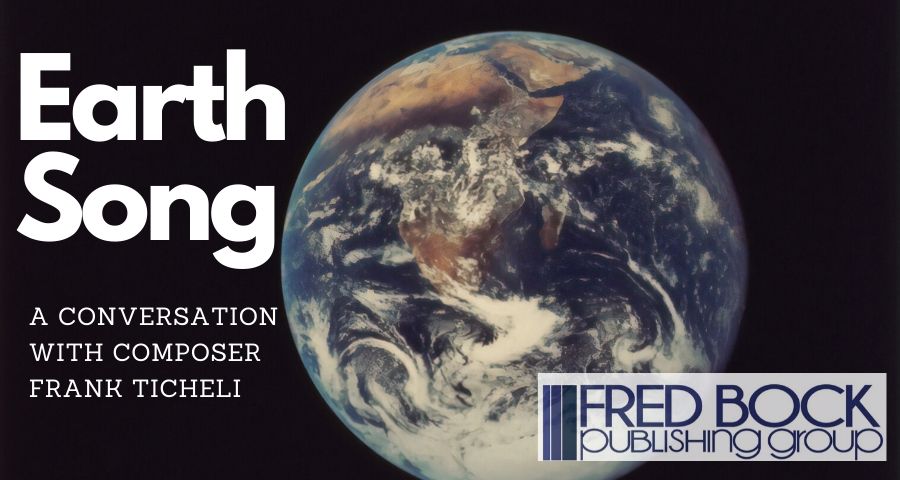 Earth Song is one of the most popular pieces in the Hinshaw catalog, and for good reason! This beautiful composition by Frank Ticheli has served as an inspiration to people of all ages since its release. It remains a favorite for choruses of all sizes and levels. This month, I had the privilege of sitting down with the composer, who is also a professor of composition at USC, to talk a little bit about what Earth Song means to him.

What was your inspiration behind the composing of Earth Song?

Well, the music to Earth Song first appeared in a work called Sanctuary for wind ensemble. As I worked on that piece, I just kept thinking “This music is just begging to be sung by a chorus”. The music is so vocal in it of itself. It was also written during a time when we were sort of stuck in the Iraq War when everyone – regardless of what political side they were on – was tired of that war, and so Earth Song was written to be very pro-peace. I guess you could also say anti-war and anti-violence. It was a cry and a prayer for peace.

What are some things that set apart Earth Song from your other choral compositions?

The fact that I wrote the words makes it very unique to me. In fact, the opening lines of Earth Song gave me some trouble when I was setting words to the music. I needed complete thoughts. And so I came up with “Sing. Be. Live. See.” That was the solution. What’s cool about that is, when we are confronted with problems, they often force us down a path to find a solution that I may not have been able to find without that tension. I had to have a crisis moment first for my subconscious to be able to find a solution that my conscious mind couldn’t find.

Many people have a wide variety of opinions on what Earth Song means to them. What does this song mean to you, especially in today’s political/environmental climate?

I think the word “mean” can be a problem word for poems. A poem doesn’t have to mean one thing – it doesn’t even necessarily have to mean. A poem is. It just is. And Earth Song is the same way. It means different things to different people. I know for me, it sprang out of an intense weariness of war and a wish for peace. The second half of the poem talks about music as a comforting force and a refuge. When I was bullied as a kid, music was my refuge. I often thought about bullies in relation to this piece as well, because that’s where violence starts. But music is a place where people can find acceptance and love – and it can often be their saving grace. And it’s not just choir that people can find that comfort – it’s band, it’s orchestra… it’s just people coming together to make music.

Can you give me one big takeaway for conductors who are about to conduct this piece? (to ensure that they keep the integrity of the music and its message).

Well, there’s the technical aspect of it – sometimes, conductors don’t handle that opening section very well. It’s all about floating into that dissonance. You don’t crescendo harshly into it, and you don’t back away from it timidly – you let it find that place in between where the dissonance can live and resonate. It’s like a flower that unfolds. Like a rose – it’s got thorns too, but there’s still beauty there.

Then there’s the aesthetic side of things – I find that the conductors that excite me most are those who are not afraid to be the music – whatever the music is to them. Their entire body and body language should reflect what that music means to them. Their face and every gesture they make should express it. If the music is tender, be tender. If the music is sad, show it. If it’s angry, show it. All of those things have to be there. Too many conductors don’t do that, but the music demands it. Because music is a human connection. And it’s something we crave.

But the most important thing that a conductor can do with any music is this: it’s to keep the performers inspired. If the fixing of something starts to get in the way of that goal, then you need to stop fixing it. Take care of that later. Just don’t lose that focus and that goal of keeping the singers inspired.

I’ve noticed a lot of virtual choirs doing covers of Earth Song right now. Why do you think choirs find Earth Song cathartic or impactful as a piece of art that gives them a voice in a time when so much is uncertain and unknown?

I’m not entirely certain why Earth Song has emerged as a kind of anthem for the times, but I think it partly has to do with the simple, heartfelt, message I was trying to express when I wrote the text and the vulnerability of the message. I was trying to remind myself that I’m human, I’m breakable, but I can always find a way to heal through music.

Do you mind sharing the Earth Song Lyrics here?

The music and message of Earth Song are timeless, but perhaps they are even more meaningful in the world we live in today. When illness, poverty, and fear threaten us on every side, music remains a constant support in our lives – helping us remain grounded and secure no matter what comes our way. Earth Song serves as a perfect reminder of that fact. May we continue to always find peace in music – even when life overwhelms us and pulls us apart.